The table below gives an idea of when these routes are more optimal:

In core branding you have to be really, really good at what you do.  So good that you own the category. It’s even better for you if you can create or carve out a category (and hang on to your leadership).  Your branding and communication platform is built around what you offer your clients.

I started using Google back in 1998 after a colleague went into raptures about how useful it was compared to AltaVista which was then the favoured engine. Google is an example of  a firm that created its own category – categorising all the information in the world – and established leadership. Most of their other offerings are built around this core premise.

Core brands are not necessarily the first in their category.  But they are usually the first to provide a service that meets all the users’ requirements of competence in an affordable or convenient manner.  Microsoft, Amazon, Wipro have all adopted a core branding strategy.

In general, a core brand is very good at what it does, invests a lot in staying ahead in its chosen field, and builds its communication program around its service or product excellence.

I find that the downside of a core branding approach is that even for offerings which are truly unique, constantly building the better mousetrap is not required in all industries, or by all customers.   After a point the quest for excellence ceases to be relevant to the consumers and unprofitable. (How many of you actually USE all the features on that cool TV? Do you want MORE? And would you pay for all those extras?). It may also get more and more difficult to sustain the core promise – for example, Indigo Airlines lives (and dies) by its on-time arrival statistics, but crowded runways will make that progressively harder.

Take the example of hotmail – definitely a great product, and excellent marketing.  Putting the self-publicity line “Get Your Free Email at Hotmail,”  Was brilliant advertising.  But Hotmail was always a functional offering – people didn’t feel “cool” about using hotmail over, say, Yahoo.  Contrast this with how google positioned gmail. Sure the offering was superior (more storage) but because it was “by invitation only” in the beta phase it became hip.  People ditched their other ids to adopt gmail, which now accounts for over a quarter of emails read.

It’s incredibly arrogant for a company to believe that it can deliver the same sort of product that its rivals do and actually do better for very long. That’s especially true today, when the flow of information and capital is incredibly fast.

Google is a good example of a brand that switched from a core to a context strategy.  In its launch phase it was very focused on the excellence of its search engine. As that offering matured, it has moved to a context branding approach.

It isn’t always possible to have a simple, easy to define service or product.  Nor is it always possible to create a new category based just on excellence. If the service isn’t differentiated in the basic offering and derives its market value from the way it is sold or consumed, then I think core branding is not a sustainable strategy.

That brings us to the second route to differentiation.  Context branding. In this case you may not be the first or even the best.  But you can find a specific context in which you are superior, and use that as a differentiator.

In the Indian IT industry, Infosys is a great example of this type of branding.

Infosys wasn’t the first big IT company (IBM was).  It wasn’t the first big IT firm in India (that credit goes to Tata Consultancy Services).  It wasn’t even the first to do remote projects from Bangalore (that honour goes to Texas Instruments).  Yet, by 1999 Infosys was being voted “India’s most admired company” by the Economic Times Survey of Most Admired Companies, and featured in the Forbes list of “20 most promising small companies in the world”1.  How did they achieve this status?  The answer lies in their positioning strategy.

Infosys – the poster-child of context branding

In the early 90s Indian businesses in general were not known for their swanky workspaces, governance standards, or wealth sharing policies.  Yes, there were other companies which adhered to these principles, but they did not publicize them and certainly were not well known outside India for these aspects.  Mr N R Narayana Murthy long-time Chairman & CEO of Infosys had a guiding philosophy that “we must do something different”.

Infosys’ core offering, IT services delivered from India, wasn’t all that unique. But Infosys decided to differentiate itself from its Indian competition on all the other aspects of an organization – Finance, HR, Marketing, Sales, Corporate Governance, Facilities, Management. 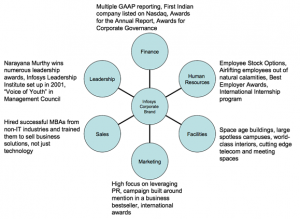 Aligned with Infosys’ vision statement to garner “global respect”, each of these departments was encouraged to get global acknowledgement, in the form of awards.  This then fed into communications and created a virtuous cycle. And at a time when India had a reputation for being dusty and backward, there was not a speck of rubbish in the Infosys campus – in fact, Mr Murthy was known to personally supervise the cleaning of the cobblestone paths, with toothbrushes!

Of course, none of these features were uncommon in the US, but Infosys stood out because of the context.  A clean, ethical, swanky company that shared its wealth with its employees and shareholders in India?  In a country then best known for elephants, fakirs, snakes, dust, mud huts and shady business practices?  Wow!

Was all of this required to produce great software?  Not really. But it did make Infosys one of India’s most desirable employers, make clients proud to work with them, and have international journalists scramble to cover this Indian anomaly.

If you choose the context branding route, you will have to invest in maintaining this differentiation in ADDITION to ensuring that your core business continues to be superior. This is in contrast to core brands which just have to keep excelling in their basic business to keep their engine running.

The principle downside of context branding is that over a period of time others will imitate these features and they won’t be unique any more.  So you will have to try harder and harder to “be different”.

Let me use a diagram to summarize what can be used as levers for context branding and core branding respectively. 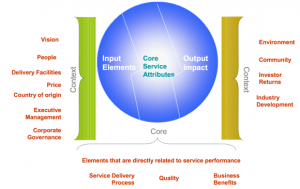 An organization can choose any or all of the elements as the ingredients of its branding program.

A more recent example would be Nike’s choice of Kaepernick, a controversial NFL player as their brand ambassador.  While it doesn’t change any of their core, functional attributes, it does dramatically change their surround position.  In today’s US context it positions Nike as edgy and a bit of a rebel, appealing to both youth and people of colour through this choice. 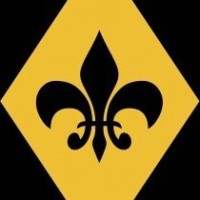 How to coach your brain to increase your attention span

Yes we can do it!

no ownership, no copyright, no credit

Everything about Productivity Tips, life and Future.

Poet/Writer/Translator: Love and torment go together like day and night.

Give the gift of reading with Bookieboo

Uncensored Beauty, Motherhood, Style & Everything Between

The Adventures of a Nurse
CJ Mollo

Hillborn Organic Coffee is a family owned business located in Moshi, Tanzania. Our fun team, knowledgeable and experienced guides specialize in various types of tours. We have thorough knowledge of the region and provide the best experiences. Whether on a budget or wanting something more luxurious, Hillborn Organic Coffee will provide you with a trip of a lifetime. Charity Work: Another very important attribute of our company which is extremely close to our hearts is the charity work. The charity organization currently has two projects underway. The first project addresses women's menstrual health. Most women especially those who come from poor family backgrounds are unable to buy normal pads every month. The project aims to educate women about their menstruation cycle and promote best practices to improve their health and wellbeing. We also provide these women with health kits which include reusable pads that can last many years and therefore are more affordable than normal period pads. The second project aims to help poor communities and people in villages who are unable to afford basic needs. We go to the villages and look for people in need such as the elderly, orphans and widows. Once we have them on list; we go back to provide them with some of basic needs including rice, cooking oil, soap, clothes and medicine for those who they are sick. The Charity Organization is a result of many years of hard work. It is only beginning of many more projects to come. It is truly a blessing to have the opportunity work with and give back to our community. If visitors wish, they can choose to visit these communities and also volunteer to help out with this organization.Eastern Africa is known as the historical home of the coffee plant, and the region continues to be a major global supplier. On a tour from Kilimanjaro, you can learn the significance of Tanzania’s coffee trade and sample freshly brewed coffee from beans roasted on working plantations. Here’s what you need to know.   Highlights Discover some of Tanzania’s oldest and largest plantations in the foothills of Mount kilimanjaro, just outside Moshi town. Visit family-run plantations for insight into the production process and daily life of coffee farmers. Taste freshly brewed, locally grown coffee, and learn about its international trade. Combine your tour with other regional attractions on a multi-day sightseeing excursion.   Tanzania Coffee History Having made its way to Tanzania from its native Ethiopia more than 400 years ago, the coffee plant has long been a valuable trade crop in the country. The arabica variety dominated under German colonization, leading to its widespread naturalization today. However, the robusta species still accounts for about 30 percent of Tanzania’s total produce. Kilimanaro's arabica beans are particularly notable for their distinctively rich flavor, a product of high elevation and fertile land. Look for opportunities to purchase local produce. Some smaller sellers will also give you the chance to practice your manual bean-grinding skills too.

Whisper and the Roar

A Thousand Bits of Paper

“As writers, we live in our heads, one foot in this world and one in the next”

A Unique Title For Me

Faith, friendship, and love conquer all. Unless. Lets not forget how messy the world is.

News, Politics and so much more!

keep fighting your dreams no one can make you inferior without your consent......

traditional haiku in the english language

Showcasing the best of female talent. Filmmakers and Screenwriters